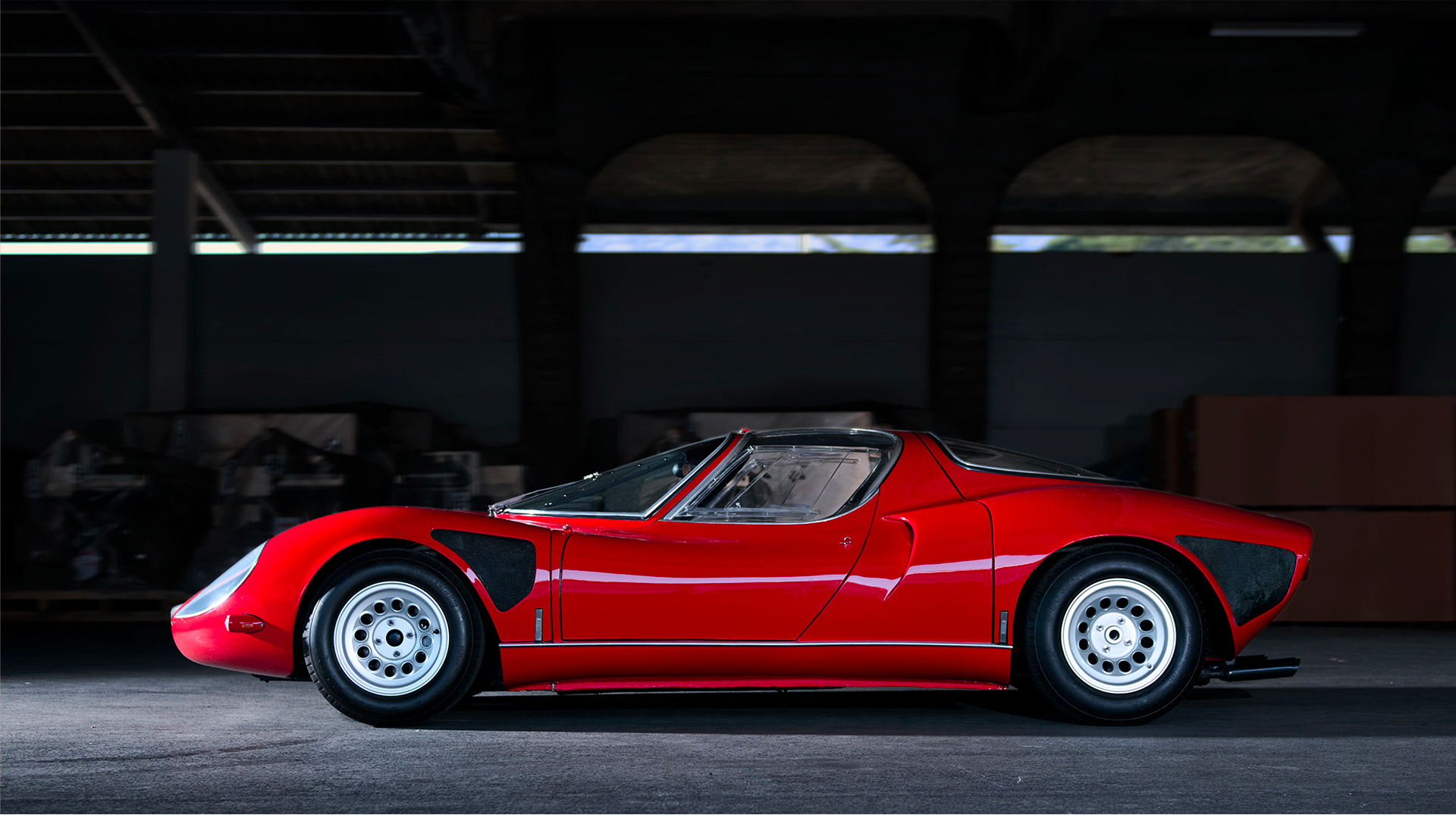 The 33 Stradale is the road-legal version of the Tipo 33 racing car and is considered by many to be one of the most beautiful cars of all time, and because the aesthetics are so unaffected by the 50 years that have passed since then the lines of the modern 8C Competizione and 4C are inspired by, and very reminiscent of, this car. In 1967, when it came to dressing the mechanicals of the Alfa Romeo ’33/2′ (the ‘2’ indicates the generation, hence the second) for competition with a body that would interpret the refined forms of the mechanicals conceived exclusively for racing purposes, engineer Carlo Chiti, General Manager of Autodelta, Alfa Romeo’s racing department, chose Franco Scaglione, another undisputed Italian genius capable of creating the most beautiful bodywork in the world. Scaglione, a scion of old Tuscan nobility and an extrovert of unquestionable charm, was considered a master in the field of design (not only cars), and some of his creations were already considered works of art at the time. Looking at some of his preliminary drawings, Giuseppe Luraghi, President of Alfa Romeo, chose one of rare beauty, and simply said: ‘Let’s make this one’. Scaglione, known for his uncompromising attitude and his almost maniacal need to transmute every object into a work of art, asked for and obtained absolute freedom in creating the car. His guiding idea was to respect as much as possible the properties of the Tipo 33 in a “suit” created around its racing soul. This was also what Luraghi demanded, indicating a difference of just 5% as the maximum threshold compared to the performance of the track version. In the 1950s, Franco Scaglione became internationally renowned for the stylistic innovation and non-conformist language he brought to dozens of bodywork designs of unparalleled creativity. It suffices to recall the three famous Alfa Romeo ‘Bats’ (Berlinetta Aerodinamica Tecnica) with which Nuccio Bertone and his specialists transferred Scaglione’s imaginative concepts to sheet metal, and even more so the well-balanced and highly polished Arnolt-Bristol, which was also fitted out in the Bertone atelier in Corso Peschiera, Turin. Scaglione once again expressed himself with bold ideas and originality of line, creating a very profiled berlinetta with fascinating lines. For reasons of space, the wheelbase was lengthened by 100 mm compared to the ’33/2′, while the central part of the chassis was made of sheet steel to increase its strength. The “33 Stradale” flaunted plastic forms, skilfully joined together yet conceived in the name of maximum functionality; the play of air intakes and the large open surfaces to evacuate heat from the front end and the engine compartment created a play of full and empty spaces to great aesthetic effect, in which the large panoramic glass surfaces (windscreen, rear window and side windows, which also enveloped the upper part of the roof) also played a part. 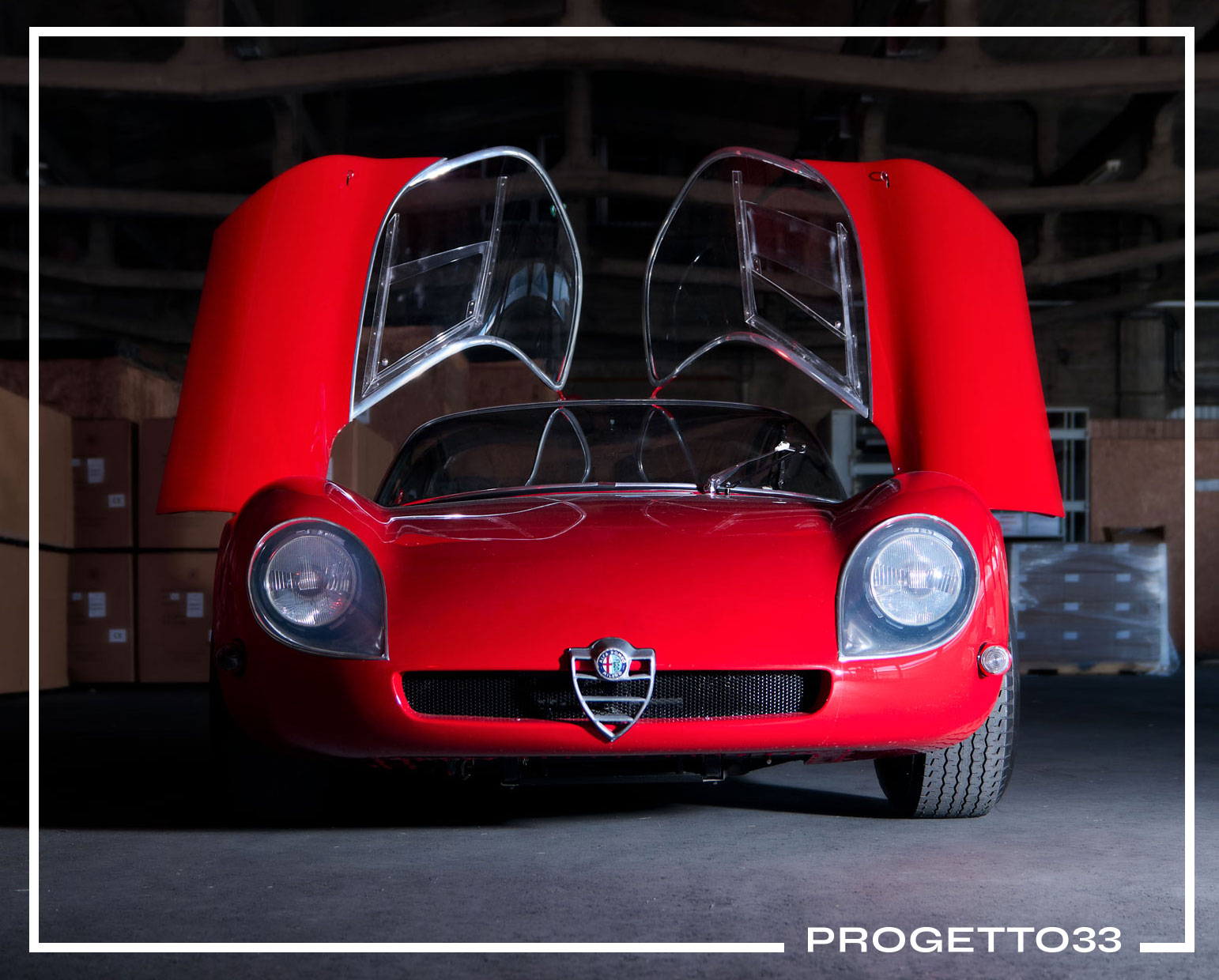 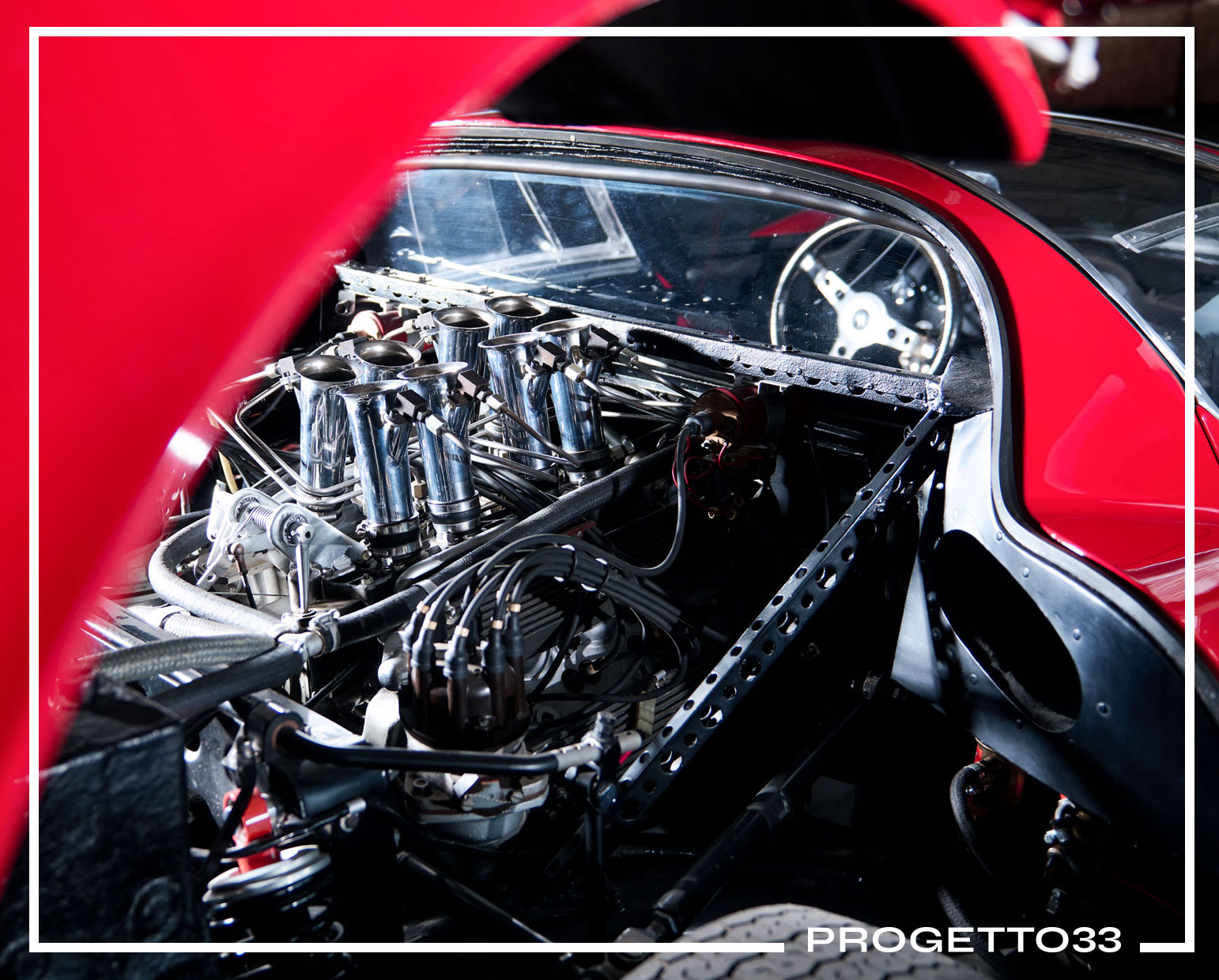 It is now clear that the styling research for this car was strongly conditioned by the functional (the integral openings of the front and rear bonnets, for example) and aerodynamic requirements of the vehicle. And yet everything about this bodywork is perfectly harmonised, without hesitation or style lapses. As is appropriately emphasised in a brief graphic presentation of the ’33 Stradale’ issued by the Marazzi coachworks in Caronno Pertusella – which built the car in 1 mm thick Peraluman H35 just a stone’s throw from the Museo Storico Alfa Romeo in Arese – the ’33 Stradale’ is an example of high style ‘somewhere between the work of the craftsman and the work of the artist’. It was the first road car to have ‘butterfly’ opening doors that also hinged on the roof with the windows wrapping around the roof, designed to amaze but also to be practical because they improved accessibility to a very low and relatively narrow passenger compartment, and the grilles on the front and rear wheel arches, open to prevent dangerous overpressure caused by the movement of the wheels. A model, that of the 33 Stradale, which is still used today as an example to describe the perfect balance between refined mechanics and the style that surrounds it, in a balance that can be summed up in a phrase dear to the brand: ‘Essential beauty’.

An extremely sophisticated car, the chassis complete with engine and gearbox was built directly by Autodelta, alongside the Tipo 33 racing cars. The engine, the same as in the Tipo 33 competition car, is a 1995 cc 8-cylinder 90° V8 with a bore of 78 mm and stroke of 52.2 mm, designed by Alfa Romeo Mechanical Design Director Giuseppe Busso and then developed by Autodelta.

An authentic technological jewel, built entirely in aluminium and magnesium, it had a double overhead camshaft timing system for each bank, two 48° tilted valves per cylinder (33 mm diameter intake valve and 28 mm diameter exhaust valve), sixteen spark plugs (two per cylinder), Spica indirect mechanical injection system with double electric fuel pump and dry sump lubrication. In the competition version the engine delivered 270 hp at 9600 rpm with a compression ratio of 11:1, while power in the road version was limited to 230 hp at 8800 rpm thanks to the lower compression ratio of 10:1 to make the engine more suitable for road use. Nevertheless, this remains one of the most powerful naturally aspirated 2000 cc engines ever made with a record top speed for the time, which even today remains very fast for a road car. Its 230 hp is a lot of power for a road car, when achieved with mechanical technology alone and without the help of electronic management adopted by modern cars. This engine was mated to a 6-speed manual transmission coupled to a self-locking differential mounted cantilevered over the rear axle. The 33 Stradale was very light (690 kg) and compact and was capable of very high performance for the time, as it is today, with a 2-litre naturally aspirated engine. In fact, the declared top speed was 260 km/h and acceleration from 0 to 100 km/h was 5.6 seconds. Auto Italiana magazine, which tested the car in February 1969, recorded 4.9 seconds from 0 to 100 kph and a top speed of 245 kph.

Of the 18 chassis, only 11 were sold to customers. There are slight aesthetic differences between each of these examples, the most obvious of which are the presence of just two front lights instead of the four of the prototype and the hinged windscreen wiper at the top or bottom. In addition, some have a better finished interior than others because originally 50 examples were planned (then not built) to be divided between the more comfortable A or Lusso version, with drop down windows, comfortable seats and a heating system, and the sportier B or Competizione Gr. 4 version, with performance similar to the Tipo 33 racing cars, had fixed windows and racing seats and no heating. On the basis of the last six, the best Italian coachbuilders created a series of extraordinary concept cars. In particular, Pininfarina created the Roadster by Paolo Martin in 1968, the Coupé Prototipo Speciale by Leonardo Fioravanti in 1969 and the Cuneo in 1971; Bertone created the Carabo in 1968 and the Navajo in 1976, both by Marcello Gandini, while Giorgetto Giugiaro’s Italdesign created the Iguana in 1969. All the concept cars bear the Alfa Romeo name and trademark and are on display at the Museo Storico Alfa Romeo in Arese together with one of the two prototypes of the 33 Stradale in a version with four headlights.