History of the EB110 AMERICA

The birth of the Bugatti EB110 is also the birth of a Bugatti returning to see the light of day after the last road car left the Molsheim factory in 1953. But how did this story come about? If truth be told, it was a rather complex and, in some ways, painful birth. It began with Romano Artioli and his iron will to bring a historic name like Bugatti back to life. An arduous mission if you think of what this name inspires in the mind: innovation, beauty, luxury, sport, victory. A very challenging gamble, demanding in terms of market expectations. Characters such as Ferruccio Lamborghini were asked to participate in this project, but he pulled out even before the project took shape. It was a case of too many cooks spoil the broth. On a technical level, the project was proposed to engineer Paolo Stanzani, who came from Lamborghini and whose reputation is closely linked to the Miura, the Espada, the Urraco and the Countach. This was certainly an ideal calling card to take on the task of creating the car Artioli wanted. The engine design was entrusted to the Tecnostile design studio of Tiziano Benedetti, Achille Bevini and Oliviero Pedrazzi, all coming from Lamborghini at the time of Ferruccio. However, the engine, transmission, gearbox and central differential were designed by Oliviero Pedrazzi, a technician of extraordinary ability and speed of execution. Tecnostile was commissioned to implement Stanzani’s wishes, but above all those of Artioli, who wanted a four-wheel drive car at all costs. To bring Bugatti back to life, Artioli didn’t just want to make a great GT, he wanted to make the best GT ever built up to that point, a car that would become an industry benchmark. This is probably the main reason why the Artioli-Stanzani relationship was troubled and ended when the ex-Lamborghini engineer left the project. For example, Stanzani had the frames of the first prototypes made of panelled tubes with Honeycomb replaced after much discussion at Artioli’s behest with carbon and in this form went into production. According to Artioli, Honeycomb was a more suitable material for a racing car than for a road car, which was therefore intended for short-term use. The chassis structure was supposed to be a box structure made of thin aluminium sheets and a composite fibre. The EB110 had to have resistance to wear as one of its distinctive qualities, otherwise it would never have been a true Bugatti. So, the choice of material for the EB110’s chassis fell on carbon fibre. Stanzani’s position, on the other hand, was conservative and dictated by his experience. The Honeycomb technique was widely used in Formula 1 and could be considered an appropriate technical solution to restore lustre to the Bugatti name. At the time, carbon had not yet been used on the road and it was not known how it would behave. 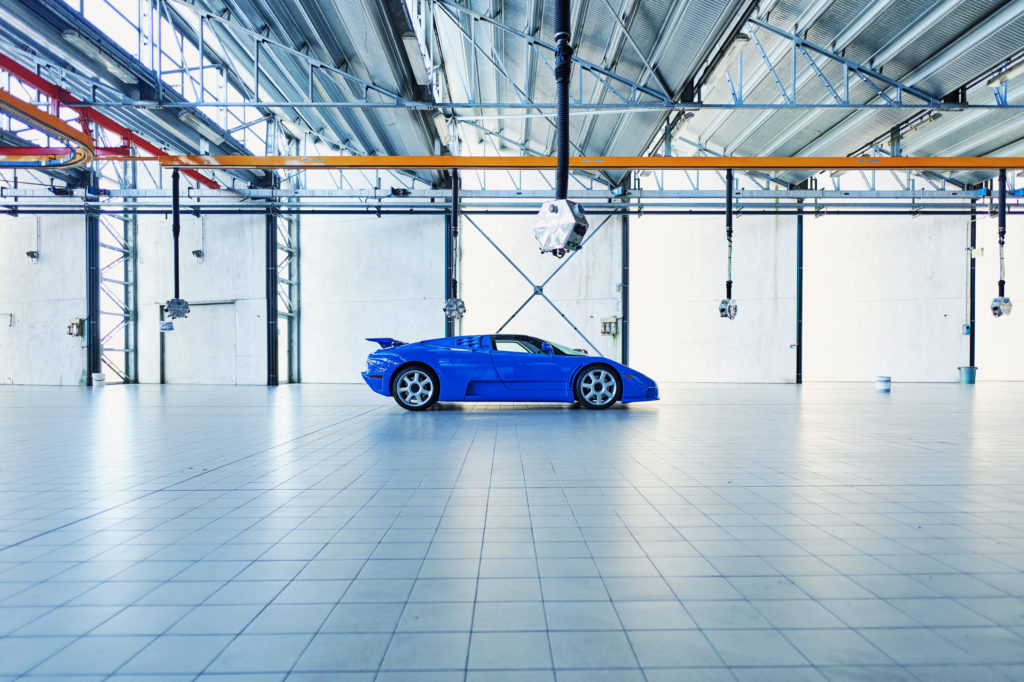 It was previously untried. Artioli’s decision was therefore courageous but also visionary, as visionary as Ettore Bugatti was in his day. In fact, the construction of the chassis was entrusted to a world-class industrial excellence, Aérospatiale, a company specialising in aeronautical and aerospace design. The bodywork also had a complicated development. Several illustrious names were approached to create models from which to choose the one to dress the first Bugatti after almost 40 years since the last car produced by the marque. Marcello Gandini’s proposal was considered, which pleased Stanzani, but did not completely convince Artioli, who saw clear similarities with the Lamborghini styling in the first prototypes. The chassis built using the Honeycomb technique showed its weaknesses during road tests, as Artioli predicted, bending and crumbling under vibration. This, together with the radical difference in thinking, lead Stanzani to resign. This was in 1990. With Stanzani leaving, the project saw some key roles redefined, including that of Technical Director, which Artioli entrusted to engineer Pedrazzi, responsible for the engine. This engine was also to represent a break with the applications of the time: 12-cylinder V-formation with a 60-degree inclination, aluminium and magnesium cylinder block, aluminium and titanium cylinder heads, and a reduced displacement of just 3.5 litres. The engine, mounted in a longitudinal mid-rear position, was capable of producing 560 hp (in the GT version and around 610 hp for the more extreme SS) at 8,500 rpm and a remarkable maximum torque of 630 Nm at 3,800 rpm. However, the distinguishing features were the 5 valves per cylinder, the supercharger with 4 IHI turbos and the 6-speed manual gearbox. Finally, the permanent four-wheel drive split 73% rear and 27% front. A whole host of applications that were new for the time, all on one car. Additionally, the car had a great responsibility: to convince the industry and the market that it was worthy of the Bugatti name. It had to astonish, literally. To this end, the extremity of the engine was born of a drive that was more commercial than technical. However, these technical solutions, as fascinating as they are, imply a great deal of experience in terms of development and fine-tuning, and for these reasons Artioli relied on engineer Nicola Materazzi. Certainly, Materazzi would not have proposed the 4 turbos or the 5 valves per cylinder and he was left with the task of giving credibility to the project with his vast experience as a designer, especially following the realisation of the Ferrari F40 project. However, although the development was evolving smoothly, friction also arose with engineer Materazzi, who wanted a change in the design of the car so as not to move a pair of radiators. This ended with Materazzi’s resignation and the handing over of the final stages of development to engineer Pedrazzi’s team. 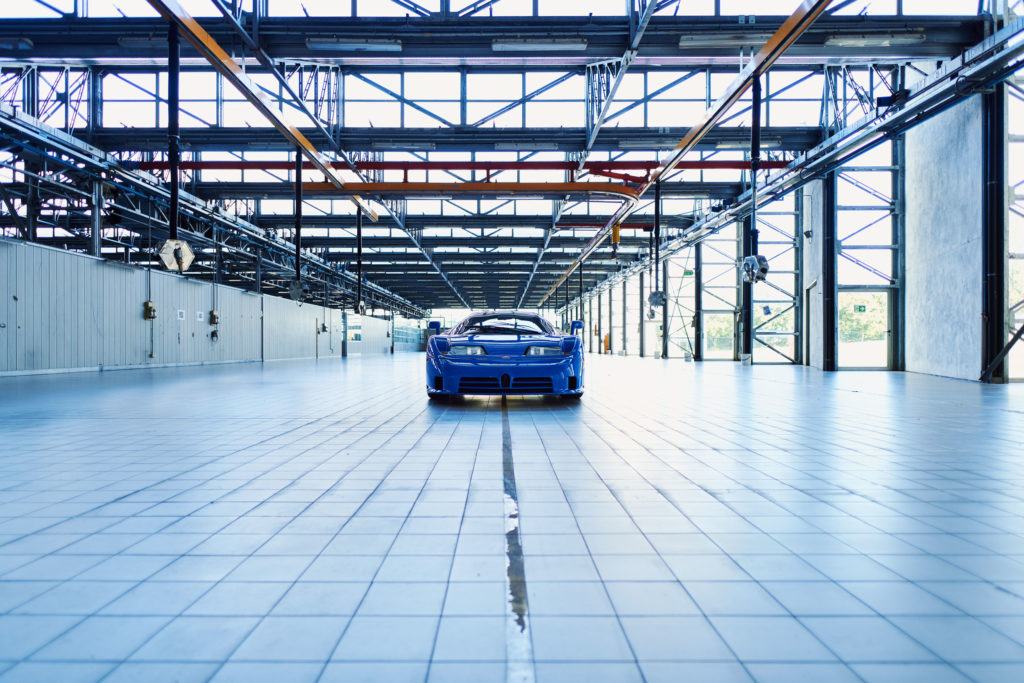 Test drivers Loris Bicocchi and Jean-Philippe Vittecoq also worked “in the field”. The final configuration of the EB110 featured a Nomex frame, a meta variant of para-aramid Kevlar. A brief parenthesis on Nomex will help to understand the technical reasons why Artioli insisted that the EB110 be fitted with a frame made of this type of material, despite the fact that his top-level expertise said otherwise. Aramid fibres are polymeric fibres characterised by a tensile mechanical strength comparable to that of the more common carbon fibres but by a lower average elastic modulus. On the other hand, due to their lower specific weight (1.4 g/cm3 vs. 1.8 g/cm3 of carbon), aramid fibres are characterised by a higher specific resistance, i.e. mechanical tensile strength in relation to the specific weight of the material. In other words, Nomex has a high-profile torsional rigidity in the field of chassis construction. It is clear, therefore, that Romano Artioli devoted a substantial part of his life to preparing for the project to bring Bugatti back to the forefront, also in terms of technical content. The tuning of the EB110 and the results obtained can be better understood through the words of Loris Bicocchi himself, according to whom the car never had unpredictable or difficult to manage reactions, even though it was only equipped with ABS. It had no sophisticated electronics to help the driver. The engine had remarkable elasticity and conveyed the sense of the man-machine relationship on the road. In other words, the EB110 gave the sensation of precision driving because of the absence of those software filters found in the ECUs of modern hypercars. Whether this car can deliver the emotions that only a high-performance car can, is eloquently answered by one of its many records: with Jean-Philippe Vittecoq at the wheel, the EB110 (in the SS, Super Sport version) set a time of 7.44 minutes on the Nürburgring’s big ring in 1993. Only the Pagani Zonda S managed to match it in 2002, 9 years later. The project also suffered its ups and downs in terms of the bodywork. Artioli asked Gandini to modify the car’s excessively square design. Artioli’s insistence on a bodywork with a distinct personality that could be associated with the Bugatti name and style, even if borrowed or, worse still, copied from the style of other automotive brands, led to a new head to head. The designer’s refusal to modify even the lines of the bodywork caused a lot of tension as the date of the car’s official presentation was scheduled shortly afterwards, 15 September 1991 in Paris. The situation was delicate and Artioli asked architect Giampaolo Benedini, who had already designed the Fabbrica Blu, Bugatti Automobili SpA’s futuristic production site in Campogalliano (Modena), to give the EB110 its definitive look. It can be said that the work was done in record time, as Benedini had about three months to complete the car’s aesthetic. Not an easy task under such conditions, and without having previously been involved stylistically on a car project. This was apparently a desperate choice on Artioli’s part. Here too, however, the words of the man himself provide the key to success: the contexts between buildings and cars are different, but the criteria for evaluating volumes and their relationships are identical (from La Manovella 09.09.2020).

Benedini limited himself to intervening where the forms were heavy, to soften them, especially at the front and rear. To create the reference to the Bugattis of the past, he was inspired by the Type 251, from which he drew above all the line of the front end with its horseshoe-shaped radiator, later reduced in size. In essence (from La Manovella 09.09.2020) (photo of the Type 251?), it was a combination of a great passion for the car and a refinement of a pre-existing stylistic structure. Nevertheless, with this revision of the shape, the car pleased Artioli, who could no longer afford further changes. In retrospect, it can be said that the forced and somewhat haphazard way in which the Bugatti EB110 design came to life is the reason why it is still relevant today. It was a design free from previous concepts and lines, detached from the fashions of the time. The sum total of the considerable difficulties encountered and the quarrelsome nature of some of those involved could have been sufficient on their own to bring such a futuristic project to a halt, but what is most surprising about the Bugatti EB110 story is not so much this, but rather how a company born from nothing managed to design and build a car so superior to any other of its era in little more than a year.